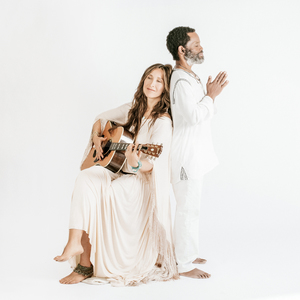 Aykanna is a husband and wife musical duo known for their soulful, percussion‐driven music and wisdom teachings. Stronger together, Sukhdev, billboard acclaimed musician and Grammy nominated percussionist Akah Jackson share their passions for healing through sound and soul.

The name Aykanna can be literally translated as a link between heaven ...

Decades of devotion sculpted the sound of Aykanna, blending masculine and feminine: the deep roots of sacred chant traditions with the spirit of shamanic healing practices. Their inspirational, positive messages are reinforced with playful beats and enchanting vocals and reach far beyond the boundaries of Kirtan and new age music genres and into the hearts of all people.

Aykanna shares their music and teach Kundalini Yoga internationally in Central America, Europe, and throughout the US. Walking Sky, Dreaming Earth is their brand new album released April 2019

Throughout most of human history, the day would end the same way in small tribal communities around the world. After the work was done, families and communities would gather around a fire. They would sing, dance, tell stories, and distill ancient learning into proverbs that helped the society thrive in harmony with nature as a basic principle of living.

The fire that brought us together then, still burns within us all, and provides us with essential reminders of the ways we need to heal in this modern disconnected world. So insists the sacred music power duo Aykanna. On their the new video and single “Ancestors” from their eponymous album Walking Sky, Dreaming Earth (released in 2019), the Belgium-born, Britain-raised ex-hip hop Poet, singer-songwriter and storyteller Sukhdev Jackson and gifted Grammy nominated percussionist (with India Arie), medicine man and Kundalini Yoga teacher Akah trace that age-old wisdom that they insist can and should inform modern life, using mantra technology with traditional indigenous instruments, percussion and chanting in utterly contemporary ways.

Viewing their collaboration more as lifestyle mission than a band, Sukhdev and Akah passionately share a joint vision to express freedom, unity, peace, and love through their work with sacred music, healing and Kundalini Yoga. Their love for one another and our Mother Earth is infectious, and spreads through their music and teachings.   That mission includes medicine music, parenting, relationship, travel adventure with tools of  Kundalini Yoga, meditation and mantra weaved into those aspects.

“The mission is to spread consciousness,” asserts Sukhdev. Awakening to the fact that we are half soul, half human. These  healing sound frequencies can support us in this new Age, where intuition, and understanding these times through compassion and kindness will rule.  Self healing and leadership through community will be part of our  future on a more global level.”

This sentiment is most thoroughly embodied in the album’s lead track and accompanying video “Ancestors,” which was inspired by the tragic passing of Sukhdev’s brother. After a deep moment of grief and realization that she would never see her beloved sibling again in this physical realm and in this lifetime, she began to hear his voice from the other side of the veil. His soul begun to speak to her in the creative process of making music and she was struck by the healing realization that he was now her ancestor and her guide.

“The lyrics and melody poured forth and were never changed from the original version,” explains Sukhdev. “I love the simplicity and sparse production of this song. The call to remember that our ancestors are always here with us - supporting us. Can we open ourselves and hear the call and guidance?”

These songs on their Walking Sky, Dreaming Earth are a natural outgrowth of a musical partnership that began a several years  ago in Los Angeles, where Sukhdev and Akah met. With her unique upbringing after the death of her mother at age seven, Sukhdev learned early on that connection is incredibly deep and profound through the heart and soul of sound.  A curiosity to discover the music her mother loved, led Sukhdev down a path of multicultural musical learning. It included dance and sculpting poems beginning at age 12 to make sense of what had happened and find a way to soothe herself. As an 18 year old, her love of the musical arts led Sukhdev to be signed to a major label in London, UK and widely recognized for her unique poetic fusion of French and English Hip Hop and RnB.

Simultaneously across the map in New York City, Akah, a 5th-generation plant and spirit medicine man was experiencing a similar musical and spiritual awakening. In 1985, he left his premedical studies in New York to search out the true healing capacity of the human body and soul Determined to restore balance to his own aching heart. Akah traveled to California where he was introduced to the healing effect of drum meditation and indigenous ceremonies.

It was also here that synchronicity brought the two together.

The duo quickly discovered that music was the element that bound and connected them to one another and to others. The couple understand that people relate to the story behind this music that's been nearly two decades in the making, a story of two souls coming from such disparate backgrounds, uniting them into a family of Yogi's, musicians, and authors, who desire to teach and share the gifts they have to offer.

“Akah and I met in a very beautiful way, reflects Sukhdev. “Our friendship was in playing music and it evolved into healing together as we were both looking to create something different than we had lived in our separate upbringing. We wanted to do things consciously. With heart and consciousness involved in every aspect of our lives . Over a five year period our love grew and we essentially helped each other heal and awaken.”

Just as with that ancient fireside sharing of stories and songs eons ago, it is often after a meditation or while just playing together at the end of the day, that most of Akyanna’s songs come into existence. In their big king-size bed with their little girl in the middle, Sukhdev will grab the guitar as Akah grabs the Udu (an African clay drum traditionally played by women) and a new version of chant might birth itself. But the best part is when their six year old daughter Sahej joins in a chant with them, notes Akah.

The new video for “Ancestors” produced by family friends Darius Fisher and Chumash, portrays this loving and creative family dynamic poignantly. The improvised video includes their daughter and shows the family in Rose Valley, CA,  just doing the things they would naturally do if they went out into nature: singing songs to the earth, drumming, frolicing in the river.

“The goal is to reconnect with the wisdom of our ancestors through this humble and very natural act,” says Sukhdev, “to awaken to our essence and what has been forgotten in modern living.”  This is where we believe the devotional aspect of music, chanting together, dancing together and  telling stories is important for our evolution to bring us back to the simplicity of life.”